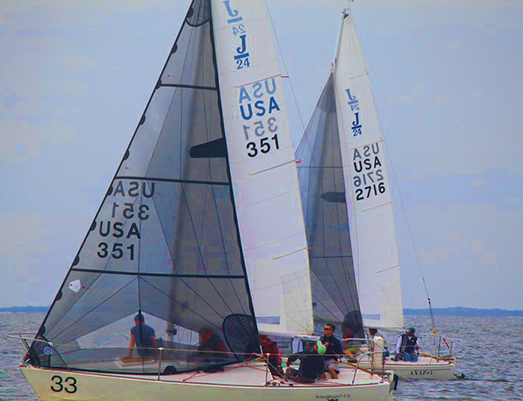 Jim Reichel our agent in Long Island checked in at the J-24 nationals, chartered an old boat and sailed it for the first time.

Learned a ton and beat all the 'local' boys.

Our new genoa was built right within ounces of the class minimum and had our new center release buckle hanks (no catching up the spinn sheets) and scored a lot of points on fit and finish. Well done Jim! 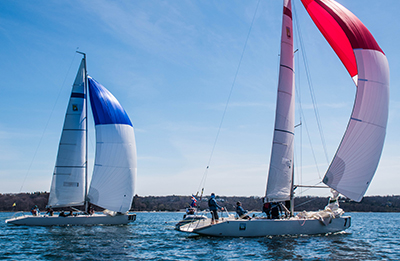 Our first order built during the winter, was to outfit their fleet of Match 40 racing sailboats with new spinnakers. Designed for racing but built to stand the rigors of use at this level, the sails are .75oz nylon, radially cut and with the addition of 1.5oz nylon in the high-load and high stress areas of the sails.

Oakcliff Sailing has summer training programs in inshore, offshore, high performance, onboard reporting, and match racing, and the center hosts weekly racing and race training for supporters. Led by former America’s Cup and Whitbread round the world racer Dawn Riley, Oakcliff trains athletes of the highest caliber on a variety of race boats in a variety of disciplines. With a complete live-in bunkhouse that can sleep up to 40, athletes have around-the-clock access to the facilities training center, sail loft, boatyard, and workshop. This America’s Cup style campus allows Oakcliff to produce complete sailors who are not only excellent racers but also proficient in a wide variety of industry skills from campaign management to sailmaking and composite work.

Our work with Beneteau Yachts on their new and very successful ASA 22 training/club boat started several years ago and led us to series of design changes and system improvements that helped to make this boat simple and easy to sail, but refined in performance. These ideas were then transferred to First 20 and First 25 and in working together with the engineers at Beneteau France, Z-Spar Int. and Facnor Furling Systems we have helped to make these three models terrific sailing boats that perform with incredible ease of sail handling (read more below video).

The first visually obvious design feature is the lack of a backstay which in turn allows us to build the very efficient square top or 'spitfire' mainsail. This profile improves performance of the mainsail and the overall efficiency of the sailplan. We utilize Challenge sailcloth for the body and the radially cut spitfire head and have added full battens to the mainsail which makes sail handling easier when dropping or reefing and has the added benefit of reducing the wear and tear on the sail.
The spitfire head is precisely engineered so that the sail is able to drop and be stowed easily without any specialty hardware or removal of battens...unique to Neil Pryde.

The second big design changes is that all three boats can be had with the optional CodeZero (screacher) sail package. These sails are designed to give the owner oodles of performance but without the added hassle of setting up and flying an asymmetric spinnaker. It short; it is a powerful free flying light air upwind sail, that doubles as a superb reacher which can also be sailed at quite low angles with the wind behind you..easily getting down to 145 degrees apparent.

The beauty of the system is the nifty Facnor FX 900 furler, coupled with our low stretch free flying luff system which allows the sail to be easily furled and importantly it has U.V. protection… so unlike a spinnaker it can be furled for the afternoon as you lunch and swim and it's ready to go at a moments notice. For many, this ease of handling will make the need or desire to have a spinnaker unnecessary. Ease and fun in sailing can be liberating!

From www.beneteauamerica.com/The following is a link to a youtube video Beneteau produced showing their new 22 footer designed as an American Sailing Association (ASA) sail training boat. The new boat is in production at the USA at Beneteau factory in Marion, South Carolina. Some of its features include a cockpit designed to give students and instructors more room, with a rig specifically for sail training. Ergonomic and safety innovations ensure that every sail is comfortable and safe.

Bob Pattison of Neil Pryde Sails  worked with Eric Ingouf, director of Group Beneteau's First Series yacht division on this project. Bob went to France to test the prototype sails last summer and the boat was introduced to the public at the Annapolis boat show.

Neil Pryde sails are supplied with all the production Beneteau 22's, and we now working with Beneteau France on the sails for a new Beneteau 25' model. 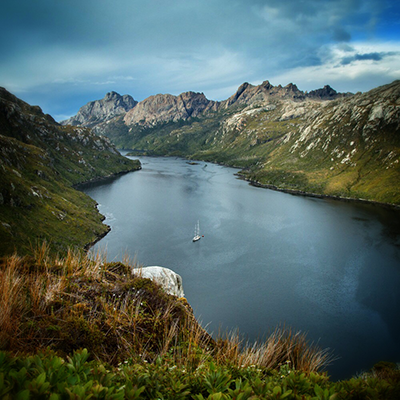 In August 2014, the Schurmann family launched their new 80 ft sailboat ‘KAT” and departed on a new around-the-world expedition. This is their third world adventure on the high seas as a family.

The Orient Expedition (www.exepicaooriente.com.br ) will follow the Chinese route, who according to a controversial theory, where the first to go around the world in 1421. The new expedition has on board a plethora of innovation, technology and a strong focus on the environment.

Since August they have traveled south past Argentina and further south to Patagonia and are writing and posting photos (they took a drone along to take photos) as they go. They sailed into bays where Captain James Cook once sailed, and to the lighthouse at the end of the world, made famous by Jules Verne. They have hiked in Patagonia, and sailed around icebergs.

And now they are in the frozen wonderland of Antarctica.

Neil Pryde Sails became involved in the project in early 2013 as Wilhelm Schurmann who was a sponsored Neil Pryde world class windsurfer started to envision this exciting new adventure. He understood the importance of working with a group dedicated to making his dream come to life, and to this end we worked closely with Wilhelm exploring fabric selection and constructions as well as designing custom fittings for the sails.
The sails themselves, given the rugged conditions found in the lower latitudes, first and foremost had to be rugged, designed for the harshest conditions known to sailors and then set well and work for many, many nautical miles as they set sail from then end of the world onto China.

This is not our first Antarctic adventure, we have previously built sails for other Antarctica cruisers one of which replaced his sails after 85,000 nautical miles in the Southern Ocean! Remarkable considering the environment in which they sail. 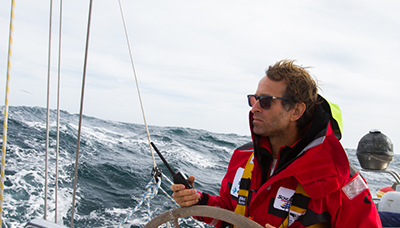 Behind the Wilhelm, the fresh herb garden (in the sphere), gets some sunshine.Follow their adventures on their Facebook page and Instagram.